Kazzar is of average height, and his body is swathed in animal skins (rats).

His arms are bare, and old tribal tattoos are obscured with the scarring of literally hundreds of animal bites.

His face is painted in camouflage, but he has a habit of using geometric shapes instead of obscuring lines, which may betray a certain greater intelligence…but probably not.

Kazzar’s septum is pierced with a rat bone.

Kazzar, “Kaz” for short, was born on the bizarre death world Croatoa.

Once the greatest hive-world of the Scarus sector, Croatoa provided munitions and men across tens of thousands of light-years. Troops from Croatoa even rivaled the Mordian Iron Guard, and the greatest veterans even participated in the Damocles Gulf Crusade, carrying their banner across the galaxy.

All of this ended when, for reasons still unclear, Croatoa came to sentience. The planet became somehow aware, or awoke from some bizarre slumber killing every psychic human instantaneously with its impossible mental awakening.

Croatoa turned on the planet’s human inhabitants, sending poisonous spores and hordes of ravenous rats into the two great hive cities. Though humanity endured in some feral fashion, the vast majority of the population was wiped out within two generations. The planet reverting to jungle, savannah, and swamp.

Kazzar’s tribe of rat hunters lived within view of the spaceport. The only human structure larger than a yurt remaining on the planet. It was the way of Kazzar’s tribe, on occasion, to seek menial labor with the imperials there. The most fortunate were allowed to take dropship to Titania, the orbiting spaceport (untouched by the Croatoan disaster).

It was on this satellite that Kaz earned his keep as an exterminator, using his skills fighting the giant rats on the surface to expire vermin in space. He worked there diligently for ten cycles, until he was approached by the men of Hargrave.

Kazzar’s routine blood tests (which screened natives for mutation) revealed a family connection with the Rogue trader Hargrave. It seems that a relation of his was used in the spaceport’s brothel by a member of the Hargrave family…or by Hargrave himself.

Kazzar sees this as a merging of the clans, and now regards the Hargrave family in the same way as his own tribe…which is to say that he sees them as mediocre, bossy, naive, greedy, and sometimes dangerous.

But they seem to keep paying him, so he’ll keep working for them. 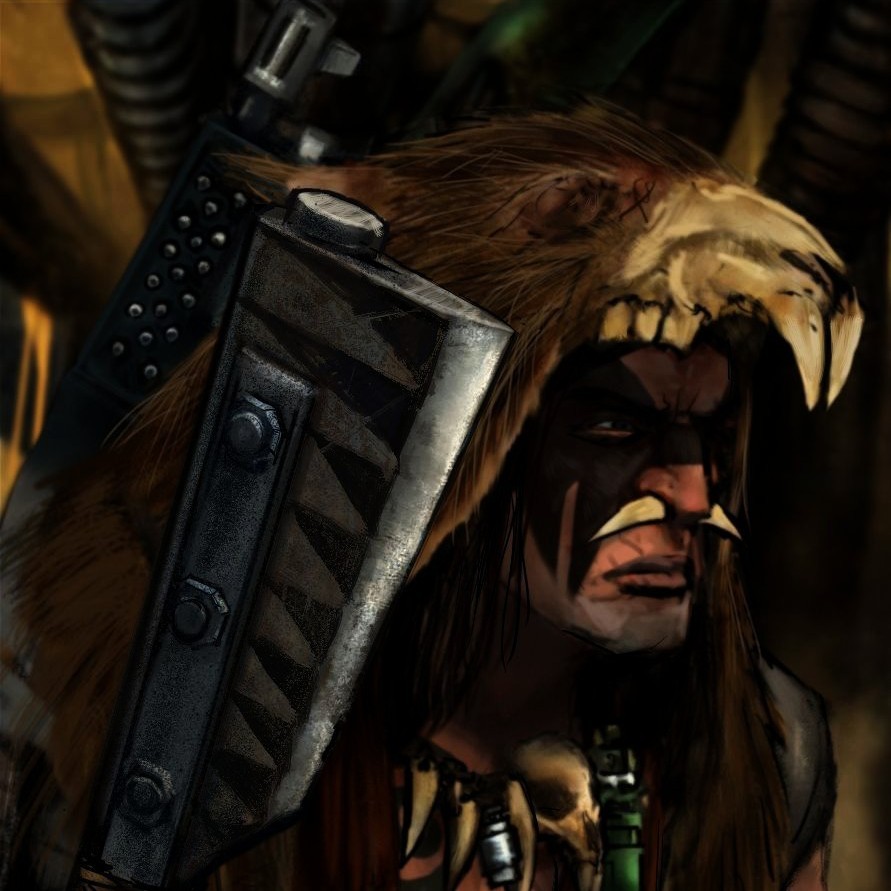