Larger than your average Ork, Biggz is quite an imposing sight. Dozens of awful scars cover his deep green arms and face, each one a story the Ork is quick to regale. The intense red of his eyes are made only more intimidating by his large, toothy grin. Biggz carries himself like a grizzled military officer, at attention when in the presence of Sybill and constantly checking his weapons when at rest.

Aside from the normal oddities of seeing an Ork in the willing presence of Humans, Biggz’ armor is dotted with crudely flattened shrapnel and broken bits of jaw and skull bones, attached with torn pieces of clothing. One could surmise these are odd parodies of medals, but nobody on the crew has the courage or patience to ask him about it, fearing an overlong, poorly told war story.

Biggz’s quarters on the ship are surprisingly organized, well, for an ork. The walls are ornamented with dozens of skulls, tentacles, and other disgusting pieces of xenos that Biggz has slain over the years, and the floors littered with half-eaten food and shed teeth. Most of his other trash is tucked neatly into a corner, and it is unclear whether or not Biggz sleeps in it, as there is no bed in the room. The most ostentatious piece of decor in Biggz’s room is an elaborate shrine to his favorite broken weapons. A crude desk festooned with hundreds of medals and trophies, each surrounding a broken axe or pistol. At the center is Biggz’s most recent loss, his trusty choppa Ol’ Faithful. Some of the more unhinged or artistically enlightened persons would call the crudely welded, brightly lit, and grimly decorated shrine a work of modern art, but most find it unnerving to be around.

Biggz was born to an aggressive ork warband somewhere in the Kronus expanse, on a world he doesn’t care to recall. He remembers little of his early life, as he usually glosses over it saying something like, “It wuz jus’ a lot o’ bustin’ hedz n’ eatin’ squigz.” Eventually, he found his way into fighting as a Stormboy, robustly enjoying the discipline, military drills, and marching of camp life. Biggz is then quick to orate his numberless war stories, in which he describes excitedly of battling a boggling amount of different foes, from nameless xenos horrors to Eldar and even, he claims, daemons of chaos.

As time went on he grew fascinated with the various cultures he fought against, especially the more militant humans. Their leaders wore striking clothes adorned with shiny medals, fancy hats, and always carried the best loot. He began to emulate these commanders and captains, fashioning crude accolades out of bitz gathered after a good scrape, and began ordering around other boyz around, even if they were bigger than him. The other boyz got tired of this quickly, and ran him out of the warband, as everybody knows only the biggest get to order anyone around. Fortunately, during his career he had met a band of Freebootaz, mercenary orks who sell their services to any ork, human, or wuteva ‘ho ’ad a need of a good krew to do sum killin’. He worked with them for a good amount of time, bringing good ol’ fashioned WAAAGH to a great many planets, until one fateful day changed his destiny greatly.

During a mighty battle on a far off death world, Biggz’ jump pack was hit by enemy fire (or, more likely, malfunctioned) and rocketed him miles away from the battlefield, suffering near fatal wounds from the deadly crash. He doesn’t remember much after that, only being able to recall vague details of recovering and gaining employment from Sybill. The truth is that young Sybill, abandoned on a death world by a rival noble family in the middle of a mass ork vs. ork confrontation, found the near dead Biggz. She had used her great psychic power to make the Ork into her thrall and guardian, and this bond somehow accelerated Biggz’ healing enough so that he was able to serve her well against roving bands of hostile xenos until her rescue. She then, for whatever insane reason, decided to keep him along as her personal bodyguard, sure in the fact that her pet is well trained. Whether or not Biggz is aware of this is anyone’s guess, but Biggz doesn’t care. Since serving with Sybill he’s gotten betta loot, bigger battles, and more medals than he could ever dream of. As long as the fights keep comin’, Biggz is here, for better or for worse, to stay. 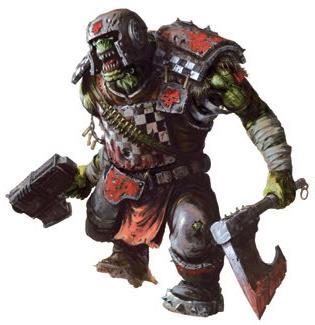